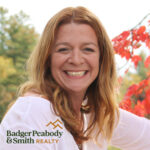 A life-long resident of Gorham, Janet Nickerson earned her New Hampshire real estate license in Spring 2016 and just recently earned her Maine license as well.
“I’ve been involved in Property Management in Jackson and Berlin,” she explains, “and I’ve really enjoyed it. Getting my real estate license seemed the logical next step.  I want to help fulfill people’s dreams of owning a home.”
In addition to her background in Property Management, Janet brings strong people skills to her new endeavor. “I’ve worked for Northern Human Services for 23 years as a Program Director for the Vocational Program —and I have a Bachelor’s in Human Services from Springfield College in St. Johnsbury, Vermont.”
The mother of two daughters ages 20 and 25, Janet has been involved in local nonprofits for many years. Currently she is sitting on the Community Impact Committee for the Northern Region of Granite United Way, and formerly on the Board of Directors. Previously she was a committee member and team captain for the Relay for Life, and served on the Gorham High School Chem-Free committee. In 2014, Janet received the Volunteer of the Year award for Granite United Way.
~Licensed in NH and Maine